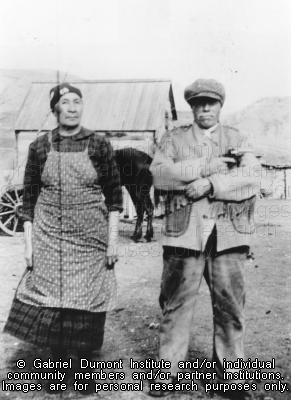 The Gabriel Dumont Institute (GDI) works with Michif speakers to preserve and promote the three Michif languages spoken in Saskatchewan: Michif, Michif-French, and Northern Michif.  GDI employs sociological conventions when classifying a Michif language: if a Michif person living in Saskatchewan calls their language “Michif,” than the Institute respects their wishes and calls that language “Michif.”  As part of our cultural mandate, most of GDI’s publications include Michif components.

Spoken mainly in southern and central Saskatchewan and Manitoba and ranging into North Dakota (the area in and around the Turtle Mountain Reservation) and some parts of Montana, Michif is considered by linguists to be the true mixed Métis language. It mixes Plains Cree verbs and verb phrases and French nouns and noun phrases along with some  Nahkawē (Saulteaux) and English , depending on the locale and family.  Michif-French, spoken in various places in all three Prairie Provinces, is a dialect of Canadian French that sometimes employs an Algonquian syntax.  Northern Michif, spoken in northwest Saskatchewan, is a dialect of Plains Cree with a tiny number of French loan words.

According to Norman Fleury, Michif language specialist, speaker, and traditional storyteller, “Michif” was the “nationality” (ethnicity) and the languages now known as Michif were Métis versions of “Cree” and “French,” despite their differences with standard Cree or French-Canadian French.  The old people referred to the language we now call Michif as the “Cree spoken by the Michif.”  Michif-French was referred to as the “French spoken by the Michif.”

Michif-language resources, including dictionaries and children’s books, can obtained through the Gabriel Dumont Institute at shopmetis.ca.